Matt Barnes might try to rejoin the Warriors this summer

An old friend wants to make a return to the Golden State Warriors.

Matt Barnes, a key member of the Warriors’ 2007 playoff run that included a huge upset over the highly favored, number-one seeded Dallas Mavericks, has been bouncing around the NBA lately. He’s hoping that an opportunity to go back to the Bay Area will come his way this summer.

However, he thinks the most likely scenario for his return would involve a victory for the Cleveland Cavaliers in the NBA Finals.

“Cleveland in 7,” Barnes said. “Because I want to possibly go to Golden State next year and help them win.”

Barnes’ 2015-16 season with the Memphis Grizzlies was over-shadowed by a preseason altercation with former teammate Derek Fisher, who was the head coach of the New York Knicks at the time. 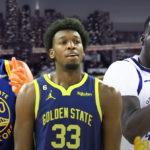 During his tenure with the Los Angeles Clippers, Barnes and Draymond Green got into it on various occasions. Together, they could torment opponents together with their trash talk and aggressive play.

With Memphis, the 36-year old averaged 10 points, 5.5 rebounds, and 2.1 assists per game. His role with the Warriors wouldn’t be that large, but given his age, it might be the best thing for his longevity, and it certainly would be the best choice for his pursuit of an NBA title.