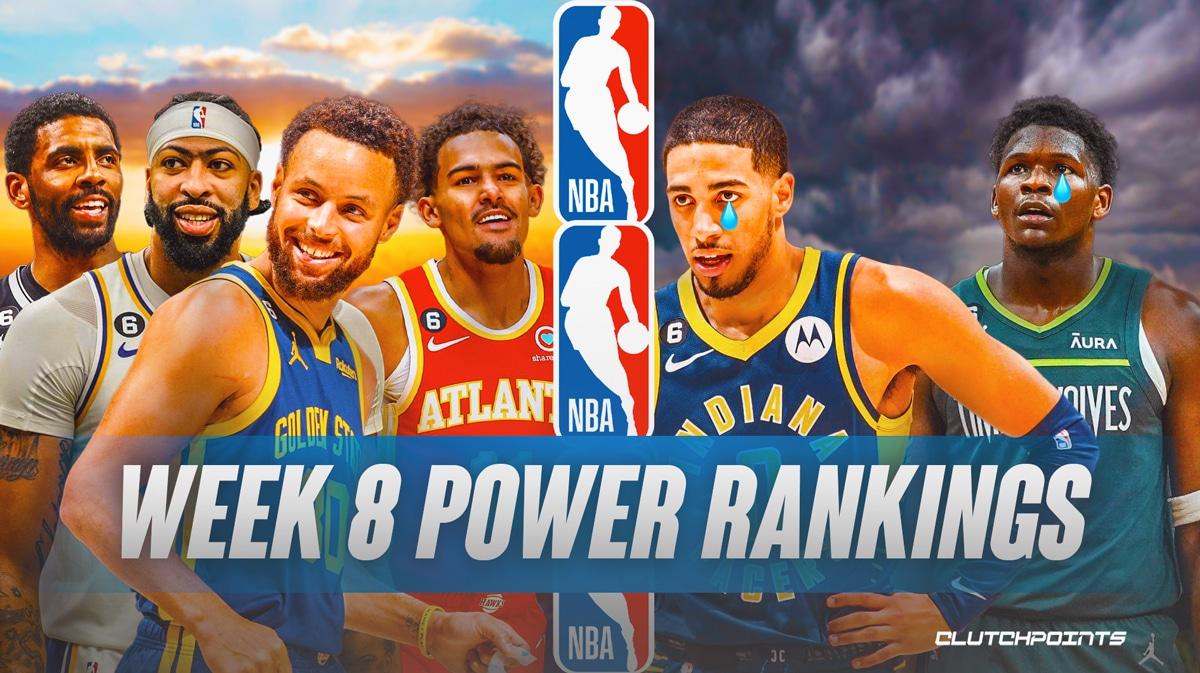 Sometimes, star power is enough to win basketball games. We’ve seen something like that happen over the past week, especially with some star-studded teams finally on the up and up in our Week 8 NBA Power Rankings. Teams with big names like the Nets, Warriors, Hawks, and even Lakers have looked much more impressive recently. Meanwhile, some young teams have blown leads and lost games due to their inexperience. The talent is there, sure, but the savvy and experience still need some honing. As we enter the eighth week of the 2022-23 NBA season, let’s see how far star power can indeed take their teams.

As always, our Week 8 NBA Power Rankings saw a lot of changes in the teams’ positions. Some teams that climbed last week have gone the other way now and vice versa. We’ve also seen how some teams that had great performances in October just absolutely crashed in November (ahem, San Antonio).

Without further ado, let’s look at our 2022-23 NBA Power Rankings entering Week 8 of the new season.

Boston split games with the Heat but overall went 3-1 this past week. They finished with a nice road win over the Nets, too. The Jaylen Brown-Jayson Tatum combo has just been unstoppable, and both should be frontrunners when the 2023 All-Star Voting begins.

Only 6 NBA players are averaging at least 27 PPG and 7 RPG.

And two of them are on the same team ⬇️ pic.twitter.com/YRo1YCSfSQ

No change in position for the Suns, who still have the best record in the Western Conference. They’re also the highest-placed West team in these Week 8 NBA Power Rankings. Both Deandre Ayton and Devin Booker had good games this past week as the Suns went 3-1, with Booker going for 51 points in three quarters against Chicago.

The Bucks went 2-1 this week, but they really should have gone 3-0. They were upset at home by the Lakers, which was thoroughly unexpected. We can’t fault Giannis Antetokounmpo, though, because did score 40 points. Now if he can just hit free throws more consistently…

Even with Brandon Ingram saddled with an injury, the Pelicans have done well. They went 4-0 this past week thanks to excellent play from Zion Williamson, and then a 38-point explosion from Jose Alvarado came Sunday. For sure, nobody saw that coming.

The Cavs slide down one spot after going 2-2 this past week. This included a loss to the Knicks that was just a little perplexing. It’s clear that the Cavs go where Darius Garland and Donovan Mitchell take them. Now, if they shoot a combined 13-of-41 in a game, well, that’s never good.

It was a bit of a tough week for the Nuggets, going 2-2. Their only wins were against the Rockets, while they lost to the Hawks and Pelicans. They still have the third-best record in the West, though, which is a good thing. Also, Nikola Jokic led them in scoring, rebounding, and assists in three of their four games this past week.

Don’t look now but the Nets seem to be putting things together rather well. Sure, they lost to the league’s best team Sunday, but they did win four straight before that. The trio of Kevin Durant, Kyrie Irving, and Ben Simmons (before he got hurt again) have had some solid games, while Nic Claxton is developing nicely, too. Simmons just needs to get healthy…again.

The Kings started this past week with a loss to the Suns, but they have strung together three straight wins since. They have had three different leading scorers in those wins, too, which is a good indication of this team’s current depth and balance.

This is the highest spot the Warriors have been in our NBA Power Rankings since early in the season. Like the Nets, the Dubs seem to be finally figuring things out as well. They have won five of their last six games and are now among the top six teams in the West.

The Grizzlies were not terrible this past week. In fact, they went 3-1. It’s just that a couple of other teams were noticeably better. Of course, Ja Morant is still a force of nature, though we’re pretty sure he wishes Desmond Bane were back in the pink of health right now.

After some recent struggles, the Jazz have rediscovered their equilibrium. Utah went 2-2 this past week, with impressive home wins over the Clippers and Pacers. Both Jordan Clarkson and Lauri Markkanen were solid, but they will be tested by the Warriors next.

The Hawks have had such a roller-coaster ride in our NBA Power Rankings, but they move up after back-to-back wins over the Magic and Nuggets. Trae Young, Dejounte Murray, and Clint Capela played quite well this past week. It’s just sad that both De’Andre Hunter and John Collins are going to miss time, though, and there’s reportedly some tension simmering between Young and head coach Nate McMillan.

The Sixers tipped the week off well after beating the Hawks, but then they dropped games to the Cavs and Grizzlies thereafter. Joel Embiid needs help as well. He led Philly in scoring, rebounds, and assists in two of their three games this past week.

Back-to-back defeats to the Jazz and Kings pull the Clippers down one spot in our Week 8 NBA Power Rankings. There’s still no sign of Kawhi Leonard (should be back soon, though), but at least we got to see guys like Norman Powell and Brandon Boston Jr. lead them in scoring this past week.

The Raptors went 2-2 this past week, including a nice win over the Cavs at home. Of course, O.G. Anunoby and Pascal Siakam have been leading the way, though we also love how Gary Trent Jr. dropped a 35-piece on the Pelicans a few days ago. Too bad they lost that one.

The Pacers were so promising a couple of weeks ago. Now, however, they are our biggest Week 8 NBA Power Rankings sliders. They went from top-seven last week to No. 16 this week owing mainly to three straight losses to the Kings, Jazz, and Blazers. It sure looks like the honeymoon period is over in Indy.

Before Nov. 14, the Lakers were a dismal 2-10. Since then, however, they have been pretty phenomenal, going 8-2 in their last 10 contests. The main reason has been Anthony Davis, who has just been an absolute beast. He has, in fact, had 10 double-doubles in a row and leads the league in rebounding (12.6).

After a four-game slump in the middle of November, the Heat have won four of their last five games. This included wins over the Wizards, Hawks, and even the Celtics. Bam Adebayo continues to be really strong, too, leading this team in scoring in their last four outings.

Team Luka went 2-1 this past week, including wins over the Warriors and Knicks. That sounds good, right? Recall, however, that they also lost to the Pistons, which is very very bad. Doncic continues to do otherworldly things, but when the second-leading scorer averages just 16.8 points per game (Christian Wood), that just won’t cut it in this league.

The Blazers still have a winning record as of this writing, but barely. They went 0-2 to start the week, though they salvaged it a bit by winning back-to-back over the Jazz and Pacers. Looking ahead, though, things might get rough against the Nuggets and Wolves this week.

We’re tempted to pull the Wizards down even more because of three straight losses. However, two of those were by six points or less. Also, they’re top-10 in most rebounds and least turnovers. This is a competitive bunch that has just lost its way a bit. That’s why they’re now No. 11 in the East. 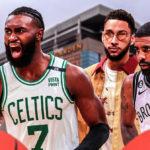 The Wolves continue to slide in our Week 8 NBA Power Rankings. For a team that has Rudy Gobert, the Wolves are pretty bad in rebounding (19th). That’s one reason they’ve lost four of their last five games, too. Also sucks that Karl-Anthony Towns will miss four to six weeks due to a calf injury.

The Knicks are in a weird spot. They’re dead last in the Atlantic Division, but they’re No. 10 in the Eastern Conference. They were actually sliding this past week before a pretty surprising home win over the Cavs. For a team that “should have” gotten the Cavs’ Donovan Mitchell, this was a nice result.

OKC climbs one spot in our Week 8 NBA Power Rankings thanks to back-to-back wins in the past few days against the Spurs and Wolves. Shai Gilgeous-Alexander remains the motor of this team, but don’t forget rookie Jalen Williams dropping 27 in their home win against San Antonio. Kid can ball!

After opening this past week with a win over the Jazz, the Bulls have lost three in a row. That also means they slide down three spots in our Week 8 NBA Power Rankings. Granted, they lost to some strong teams (Suns, Warriors, Kings), but this is a team that should still be better than No. 12 in the East.

The Hornets went 1-2 this past week, which was already a bit of a win for them, to be honest. Losing to Boston and Milwaukee was expected anyway. The victory over the Wizards was pretty good, though. Terry Rozier has also been balling for the Hornets.

The only reason we bump the Rockets up one spot is that they actually beat the Phoenix Suns this past weekend. Yes, THOSE SUNS. And yes, it was just by a point, but, hey, it was on the road! Gotta give these kids some props for that, right?

The slide gets longer and longer for the Magic. They have lost eight straight games and just look absolutely worse for wear out there. Paolo Banchero and Franz Wagner still look good (and so does Bol Bol, mind you), but there are just so many holes that need plugging on this team.

The Pistons climb out of the very bottom after upsetting the visiting Mavs in overtime. They might have to wait a long time for another huge win like that, though. Still, we’re seeing some promising things from Marvin Bagley III and Saddiq Bey.

The Spurs haven’t seen their side of the scoreboard with a higher number since Nov. 12. That’s about three weeks ago, which is obviously not good by any standard. And, man, the way this team has been losing is just embarrassing. They’ve lost their last two games by an average of 28.0 points. This is what desperation looks like, folks. Just keep the eye on that Wemby prize.