Shaquille O’Neal knows what it’s like to be truly one of one. The four-time NBA champion has famously called himself and Wilt Chamberlain the two “most dominant” players of all time, but even his fellow Los Angeles Lakers great wasn’t quite the singular on-court presence O’Neal was during his playing prime. Which current superstar occupies a similar space in his opinion? Stephen Curry, the biggest reason why the Golden State Warriors icon is one of O’Neal’s favorite players.

Chatting with Bill DiFillipo of UpRoxx, O’Neal shed further light on the unique greatness that has led him to believe Curry is “the best player in the world.”

“There’s no one like him,” he said of Curry. “People remember Shaq, there was no one like him. He’s one of those players — Mike, Kobe, LeBron, nobody like them. He has his own category: Best shooter ever. Not one of the best shooters, not Ray Allen, not Reggie Miller, he is the best shooter ever. I’m in a category, but there’s another name that you have to mention: Wilt Chamberlain and Shaquille O’Neal, the most dominant ever. I’m fine with that. But in his category, he’s by himself. Greatest player ever, 10 people in that category.

O’Neal’s continued praise of Curry comes less than a month after he predicted the Warriors would win a second straight championship in 2022-23, on the back of “by far” the game’s best player.

It’s not just Curry’s best-ever shooting ability that makes O’Neal such a fan of the reigning Finals MVP. The big man whose game hinged largely on an otherworldly blend of size, power and explosion is “amazed” by the relatively diminutive Curry’s ongoing success in a league full of giants.

“That’s what amazes me the most — Jordan was big, Kobe was big, Bron is big,” O’Neal said. “If you saw Steph in the grocery store and you didn’t know who he was, you’d just think he was a regular guy food shopping. And so the fact that he plays and dominates all those big guys, I’m amazed by that…”

No one has ever bent defenses like Curry, and he proved virtually unstoppable with the ball in his hands during the NBA Finals, tormenting the Boston Celtics’ bevy of quality defenders in isolation and pick-and-roll. Do those realities alone make him the best player in the world? Not quite.

But they certainly put Curry in that conversation at the very least, an all-time accomplishment for a guard who turns 35 next spring. Kudos to O’Neal for not just realizing it, but continuing to help fans understand what makes Curry so special, too. 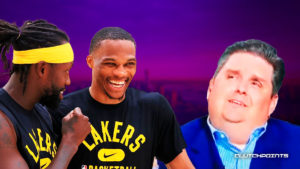