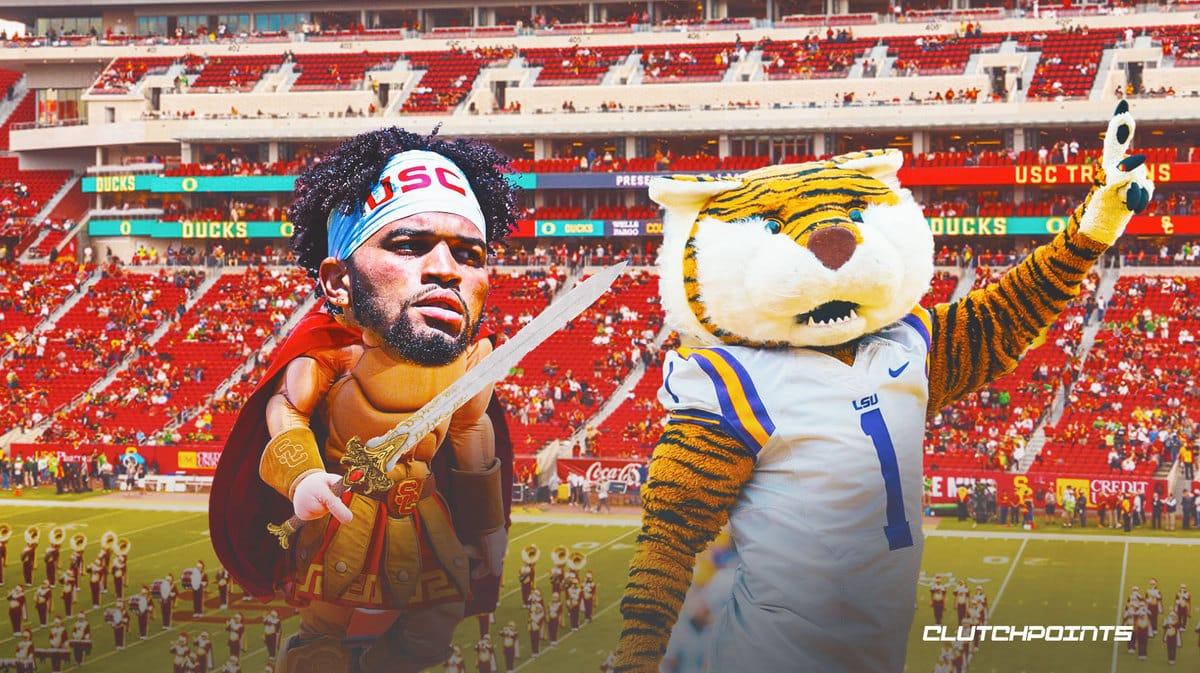 Whenever the new edition of the College Football Playoff Top 25 releases, controversy immediately follows. The latest rankings were no exception and immediately raised questions among college football fans after the release on Tuesday night. Many placements drew controversy, but none more than No. 5 LSU remaining above No. 6 USC in the College Football Playoff rankings.

The Trojans earned their best win of the season last Saturday, defeating crosstown rival UCLA in a 48-45 thriller in the Rose Bowl. Meanwhile, the Tigers had a relatively uneventful week, defeating UAB 41-10 at home in their final non-conference game this season. Despite these results, the Tigers still placed ahead of the Trojans when the new rankings dropped on Tuesday.

While both teams have a solid case to be ahead of the other, USC’s is just a bit stronger. Let’s go over why USC should be ahead of LSU in the College Football Playoff rankings.

2. USC football is peaking at the right time

When talking about the College Football Playoff, finishing strong is of the utmost importance. Several teams have started the season poorly but made it to the dance anyways thanks to their strong finishes. Take 2014 Ohio State, which lost to unranked Virginia Tech at home in the second game of the season but went on to win the national championship.

USC didn’t start the season out poorly, but the Trojans are playing their best ball of the season now. They have won four straight games following a loss to Utah, and have scored more than 40 points in each game. They also just won against a ranked team on the road in by far their best win this year.

Even better, the Trojans still have a chance to boost their resume. They wrap up the regular season against No. 15 Notre Dame on Saturday, then play in the Pac-12 Championship Game the next week. Whoever they play in the conference championship will also likely be a top-15 team, giving the Trojans three straight quality wins to close the season if they run the table.

Meanwhile, LSU looked impressive in wins over Ole Miss and Alabama, but not much since. The Tigers barely escaped against Arkansas on Nov. 12, and last week’s game against UAB didn’t reveal anything. They need to be at their best with top-ranked Georgia awaiting in the SEC Championship Game, but they haven’t been lately.

There’s still time to go, but USC looks like the more impressive team right now. Barring an unlikely LSU upset of Georgia, that will likely hold true the rest of the season. The Trojans’ strong but manageable remaining schedule should only boost their case if they keep playing well.

1. USC has only one loss and no bad losses

Winning is more important in college football than in any other sport. One loss isn’t the end of the world for a big-name team, but it certainly makes the road to a national championship a lot harder. Two losses is a death knell for almost any national title contender.

With this in mind, USC has a much stronger case than LSU does. The Trojans have only one loss this season, and it was about as good as a loss can be. They lost to Utah at home by one point on an emotional night, and even then, the Utes needed to go for two at the last minute just to win. Obviously, they would have preferred to win that game, but the Trojans have nothing to be ashamed of with that loss.

Meanwhile, LSU has two losses, and both are worse than USC’s one loss. The less offensive one is a one-point loss against Florida State where the Tigers nearly came back but lost by one. That loss looked bad at the time, but not as much anymore as Florida State has continued to improve.

The more egregious one is the 40-13 blowout loss to Tennessee at home. The Tigers were never in that game and looked completely lifeless all day. Tennessee is a very good team, but LSU should have at least put up a fight in this game.

Make no mistake, what the Tigers have done to get back in the CFP picture is very impressive, but that blemish on their resume still remains. The Trojans have been the far more consistent team this season, and that should give them the edge.