Braun Strowman is normally the biggest guy whenever he steps into the WWE wrestling ring. Measuring in at 6-foot-8, 340 pounds, Strowman routinely towers over opposing wrestlers with ease, thus allowing him to work matches that align with his nickname, the “Monster Of All Monsters.” Throw him in the ring with a performer like Roman Reigns and watch the current Undisputed WWE Universal Champion have to work from underneath while garnering surprise babyface sympathy from the assembled audience. Put him against a performer like Rey Mysterio, who looks small against even average-sized WWE performers, and suddenly you have an angle worthy of all-time great and compelling status.

But what happens when Strowman isn’t able to tower over his opponents in the ring? What happens when he’s the smaller guy and against an even bigger giant; the sort of giant who made his status with the company expendable when the pandemic hit? Well, Strowman found out at Crown Jewel, as he was tasked with wrestling “The Nigerian Giant” Omos.

As the two prepared for their weigh-in, Omos took a mic and verbally talked down Strowman, whom he towered over. Though Strowman clearly was the more experienced of the two, Omos believed that his size and the knowledge of his mentor, MVP, gave him the advantage heading into the show, as detailed by Ringside News.

“Tomorrow at Crown Jewel, the Nigerian Giant, will show the world that there is only one room for one Giant, and that’s me,” Omos said. He then asked the crowd to remember that, “Monsters are not real, but Giants are.”

Brutal, right? Now granted, Strowman did have a minor advantage heading into the show, as he was able to take care of MVP on SmackDown to prevent him from taking the trip to Saudi Arabia – that and this story too – but in order to get the win, Omos still needed to be pinned, which is easier said than done. Fortunately, after playing the role of “monster” for the first bulk of his career, Strowman proved that he can be a pretty versatile performer when given a chance. Chalk it up to working with some of the best babyface talents in the wrestling game right now, but Strowman came to the weigh-in with a chip on his shoulder and worked the match waiting for his opportunity to strike – an opportunity that came when Omos let his guard down and Strowman lifted him up to deliver a brutal, 400-plus pound powerslam for the 1-2-3 win.

Catching up with Strowman after his match, Byron Saxton asked about Strowman overcoming the biggest challenge in his career. 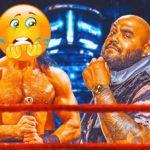 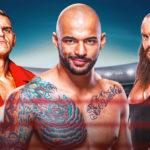 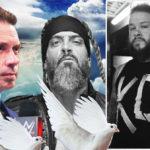 “Definitely in my wrestling career, my strongman career, I’ve traveled all around the world, you know, and competing against some of the biggest and strongest athletes that have ever walked the face of this earth and Omos is literally the biggest human being that I have ever laid eyes upon, much less stood across the ring from.” Strowman replied. “I gotta give credit where credit is due, he brought the fight to me, he had me reeling right off the gig. No one’s ever put me in a hole that deep right off the start of the match, and, you know, I had to fight from underneath, something that most people aren’t used to seeing me do, but I was able to hoist him up for the powerslam, 1-2-3, and I showed the entire world that I am exactly who I say I am: The Monster of all Monsters.”

So what’s next for Strowman now that he’s gotten the biggest – physically, of course – challenge in the WWE Universe out of the way? Well, I guess that depends on which brand Strowman decides to settle on after splitting his time between RAW and SmackDown since returning to The Fed. If he goes to RAW, a rematch with Seth Rollins could be in order, as the duo haven’t wrestled each other in a meaningful match since 2019, when Strowman lost a RAW Tag Team Championship match with Rollins to the Dirty Dawgs, and then lost a singles match against Rollins for the Universal Championship. And if he heads to SmackDown? Well, let’s just say GUNTHER would look about as big standing next to Strowman as Strowman looked next to Omos. If the plan is to keep Strowman face, then having him wrestle against “The Ring General” and his Imperium buddies, Ludwig Kaiser and Giovanni Vinci, could be the perfect next program for all parties involved.

Braun Strowman makes an emphatic statement after his victory over @TheGiantOmos at #WWECrownJewel@Adamscherr99pic.twitter.com/B83rowuagX