Booking a big-time performer to lose a match is hard. Make them look too weak, and they’ll lose their mystique, book them too well, and it can make the WWE Universe lose confidence in the match’s winner; for a producer to make it work, they need to ride that fine line and perfectly split the difference.

Unfortunately, this particular match, the penultimate match of the SummerSlam show produced by former Impact star Petey Williams according to Fightful – the wrestler who popularized the Canadian Destroyer – fell into the latter category and was overbooked to an almost embarrassing degree.

The match started off well enough, with the two performers making their way to the ring and then feeling each other out, but as the match went on, and Rousey’s lightning-quick jabs started to wear down Morgan’s defenses, it looked a lot like the former champion was going to get her belt back, and depending on your vantage point, you very well might have thought that was what happened, as, Rousey got Morgan into an armbar and got her to tap in the middle of a 1-2-3 pinning attempt.

#andSTILL! Liv Morgan gets the win over Ronda Rousey to retain her #SmackDown Women’s Championship.

A controversial finish because Ronda had Liv in an armbar and Liv tapped as soon as Ronda got pinned.#SummerSlam pic.twitter.com/5O0Eh2FDgv

Rousey won back her title… except Morgan was handed the belt, and even after watching the replay, Liv kept her belt and was allowed to leave the Nissan Center a champion. Rousey, by contrast, went ham on the security staff, and the show went to commercial with no clear insight into what happened or what would happen next. If the goal was to write off Reigns for a bit but keep her mystique intact, this certainly did the job, but the crowd’s reaction sort of said it all on this one.

.@RondaRousey has SNAPPED at #SummerSlam!!! pic.twitter.com/AJaPCrPQZF 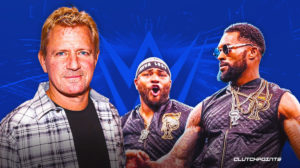