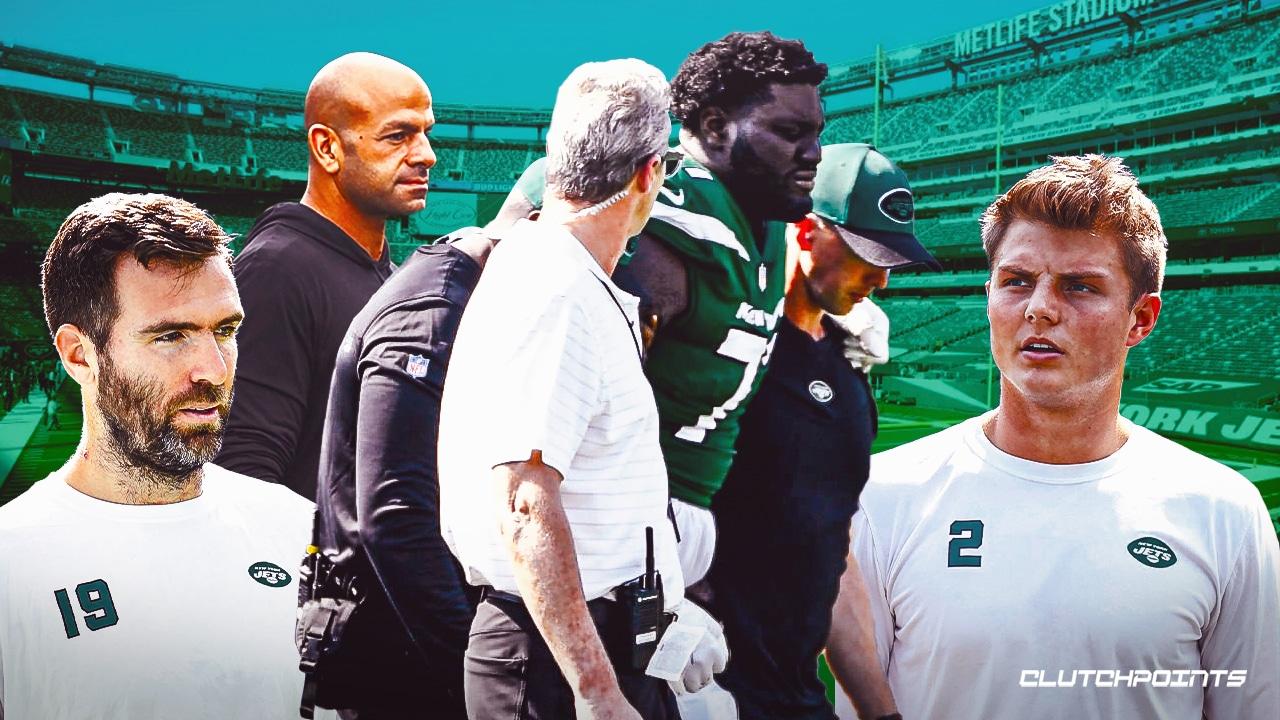 Mekhi Becton sustained a knee injury at New York Jets practice Monday but coach Robert Saleh said “it doesn’t seem like a big deal.” Of course, Saleh also admitted that he was knocking on wood.

Saleh explained that the tackle’s right knee was “stable” and that’s what made him believe “in my heart I think he’ll be just fine.” Becton will have an MRI to determine the exact nature of the injury.

Mekhi Becton sustained the injury on the second play during team drills Monday. He fell to the ground during a running play after engaging with defensive lineman John Franklin-Myers. Becton grabbed his right knee and needed help from trainers to get up. He removed his pads and limped to the locker room.

Last week, Becton had some “discomfort” in the same knee and switched to wearing a brace from a sleeve. Becton sustained a dislocated right kneecap in Week 1 last season. Expected to miss 6-8 weeks, Becton did not play the rest of the season. He worked on the side during minicamp but has been a full-go during the first two weeks of training camp and impressed with his conditioning and level of play.

His health and conditioning have been daily topics for the Jets. The 11th overall pick in the 2020 NFL Draft is a freak athlete and incredibly important to their success this season, his first as a right tackle since Saleh named George Fant the starting left tackle.

Chuma Edoga replaced Becton at practice and was promptly beaten by Jacob Martin for a sack of quarterback Zach Wilson. Edoga, who’s in his fourth NFL season, was next man up because veteran Connor McDermott is out 1-2 weeks, per Saleh, because of an ankle injury he sustained in a scrimmage Saturday.

The Jets are extremely thin at tackle behind starters George Fant and Mekhi Becton. They also have raw prospect Max Mitchell, a fourth-round pick in the 2022 NFL Draft.

Saleh, though, seemed to beg to differ with that take about the tackle position.

Veteran tackle Duane Brown visited the Jets on Saturday, met with general manager Joe Douglas and attended the Green-White scrimmage that night at MetLife Stadium. Brown, who will turn 37 at the end of the month, is a free agent after he started all 17 games with the Seattle Seahawks last season and was named to the Pro Bowl as injury replacement.

“Getting a guy like Duane Brown is like being spoiled in a sense of just having so much great talent at one position,” Saleh said in downplaying the option. “A guy like Duane is a bonus.”

Brown has only played left tackle in 202 NFL starts with the Houston Texans and Seahawks. If Becton were to miss time and Brown is signed, the Jets likely could move Fant from left tackle to right.

The solution would not be perfect, though. Fant allowed only one sack last season; Brown allowed eight sacks and 33 quarterback pressures. And there’s an off-field issue for Brown, who was arrested in July for carrying an unloaded gun through Los Angeles International Airport.

Still, Brown would be an upgrade over the options the Jets have now. His signing would be similar to Morgan Moses joining the club during training camp last season. The veteran stepped in and started 16 games in the place of Becton, helping stabilize the front five.

The best scenario for the Jets would be a clean bill of health for Mekhi Becton, who has played 15 games his first two NFL seasons and completed just eight because of various injuries and ailments.